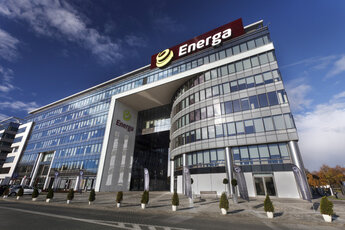 The Energa Group closed the second quarter of 2020 with stable results of operations, despite the impact of the COVID-19 pandemic on the national and global economy. Its EBITDA reached PLN 0.49bn and its revenues reached PLN 2.86bn. Nearly a half of the electricity generated came from renewable sources.

The Energa Group's EBITDA for the entire first half of the year amounted to nearly PLN 1.06bn and the revenues reached PLN 6.14bn. The net results of operations, both in the second quarter alone and in the entire first half of the year, were strongly affected by one-off non-cash events, including a write-down of the generation assets of Energa Elektrownie Ostrołęka S.A., an impairment loss on loans granted to Elektrownia Ostrołęka Sp. z o.o., and a provision for the accounting for the implementation of the Ostrołęka C project to date.

The net loss for the second quarter of 2020 was PLN (0.88)bn, and for the first half of this year PLN (0.77)bn. Excluding the impairment losses recognized, provisions made and share of the profits or losses of the companies consolidated using the equity method of accounting, the Group's adjusted net profit for the first half of 2020 reached PLN 0.42bn.

Like all the key industries, the power sector has also experienced changes in the economic situation, mainly related to the curtailment or even suspension of operations by many Polish companies. The lower demand for electricity affected all the business segments of Polish power companies, from generation through distribution to trading.

In addition to the effect of the COVID-19 pandemic, the Energa Group's performance was also affected by, among others, low margins in the area of distribution and sales, primarily the margin resulting from the applicable G tariff, which affects the results of operations of the trading company, and lower electricity generation at the Ostrołęka B. power plant operating in the must-run mode.

At the end of April 2020 the call for purchase of all the shares in Energa SA, announced in December 2019 by PKN ORLEN, came to an end. The Caller acquired about 80 per cent of the shares, carrying 85.2 per cent of votes at the company's general meeting.

The gas power industry is more flexible in balancing out difficult to forecast renewable energy sources. And average emissions where the natural gas combustion technology is used are twice as low as those of coal-fired power plants. The profitability of a gas technology project, given the present and forecast macroeconomic conditions, will be higher than that of a coal-fired unit. In addition to Ostrołęka C, the Energa Group is also involved in two other important gas projects: CCGT units (Combined Cycle Gas Turbine - gas and steam system) in Grudziądz and Gdańsk.

Distribution remains the strongest business line in terms of its contribution to the Group's EBITDA. Traditionally, this is also the area which attracts the most capital expenditure. In total, in the second quarter of the year, Energa Operator invested PLN 313m, thanks to which 15,000 new customers and new RES with a total capacity of 136 MW were connected to the grid in that period. During that period, a total of approximately 743 km of distribution lines were also built or upgraded, including approximately 131.9 km of overhead lines converted into cable lines or replaced with insulated ones.

Distribution is the driving force behind the Energa Group. In order to preserve this state of affairs, the Group makes pioneering investments in the smart distribution grid, necessary in the light of the increasingly rapid growth of the RES sector in Poland. The intensive upgrade of the lines also makes it possible to gradually connect an increasing number of microinstallations, at the same time improving the reliability indicators, where Energa is the national leader.

As far as the Generation Business Line is concerned, the share of all the renewable sources in the total gross production of the Energa Group grew to 47 per cent in the second quarter of the year, compared with 36 per cent in the prior year. What is more, wind farms reported very good generation performance: a rise from 80 to 93 GWh y/y. At the same time, coal consumption was significantly lower in this line – in the second quarter alone by ca. 41 per cent and in the entire half of the year by ca. 38 per cent y/y.

In the reported period, Energa OZE acquired the Przykona Wind Farm with an installed capacity of 31 MW and estimated annual generation capacity of approx. 75 GWh. The wind farm, whose construction cost PLN 155m, increased the total capacity installed in all the wind assets of the Energa Group to 242 MW.

The Energa Group's heating assets, including Elektrociepłownia Elbląg (Elbląg CHP Plant), where a capital expenditure programme worth about PLN 250m is currently under way, are also part of the Generation Business Line. Its purpose is to replace coal as the main fuel for heat generation with a low-emission fuel, i.e. natural gas. The implemented programme consists of the construction of a reserve and peak load boiler house (scheduled launch at the turn of 2021 and 2022) and a system of gas engines (to be commissioned for use by the end of 2024). The programme's commencement was possible thanks to the execution in June of a new heat sales agreement between Energa Kogeneracja and Elbląskie Przedsiębiorstwo Energetyki Cieplnej.

We are one of Poland’s four largest energy companies and one of the three largest electricity suppliers in Poland. Our core activities include the generation and distribution of and trading in electric and heat power, as well as gas trading.

The Energa Group is the third largest integrated distribution system operator (DSO) in Poland in terms of the volume of energy supplied. Its distribution network consists of power lines with a total length of more than 188,000 kilometres and a coverage of approximately 75,000 sq km, close to 24 percent of the country’s total area.

In 2019, the total installed electric power of the Group’s power plants amounted to 1.35 GW, 38 percent of which (0.5 GW) were renewable energy sources (RES). Since mid-2020, 39 per cent of the capacity installed in the assets of the Energa Group has come from RES.

At the end of April 2020, PKN ORLEN became the dominating shareholder of Energa SA. This is yet another stage in the establishment of a single, strong multi-energy group with diversified revenues and significant investment opportunities. The acquisition of Energa makes it also possible to implement even more effectively PKN ORLEN's energy strategy, focused on low- and zero-emission sources.

The ORLEN Group is the largest firm in Central and Eastern Europe, included in prestigious global Fortune Global 500 and Platts TOP250 lists. It operates in six home markets: in Poland, Czechia, Germany, Lithuania, Slovakia and Canada, and ORLEN Group products are sold in 110 countries on six continents. For several years now, ORLEN has been repeatedly recognized as the most valuable brand in Poland, valued at PLN 4.7bn. PKN ORLEN is also the only company in the region to be awarded the prestigious title of The Most Ethical Company by the American Ethisphere Institute for the seventh time in a row.