ENERGA OZE is planning to implement an innovative project of photovoltaic panels floating on water. This will be the first undertaking of the kind in Poland. The project was presented at the council meeting of the municipality of Kolbudy.

Floating photovoltaic panels on water would be installed on a basin in Łapino, municipality of Kolbudy. This is yet another innovative renewable energy project in the Energa Group. After a pilot project for this undertaking was completed successfully last year, Energa OZE is preparing to upscale it.

On 25 February 2020, at the council meeting of the Kolbudy municipality, a team from Energa OZE presented the design of a photovoltaic panel system to be installed on water. 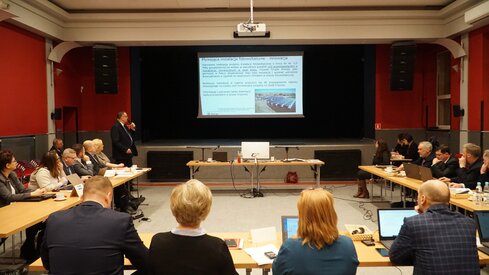 The undertaking would involve the installation of photovoltaic panels with a capacity up to 0.5 MW on a basin adjacent to the hydroelectric station Łapino, currently operated by Energa OZE. The panels would cover an area of up to 0.5 ha or approximately 1.25% of the total area of the basin.

Details of this innovative RES undertaking were presented during the meeting. Advantages of building and operating a photovoltaic farm on water as opposed to onshore facilities were discussed. Installing a photovoltaic power system on water in Łapino is an innovative undertaking on a national scale. Both the region and the municipality itself will benefit from the undertaking. The benefits will include not only new renewable energy and an improved share of renewable energy in the production mix of Energa Group (currently over 1/3).

Deputy Head of Innovation and Development at Energa OZE, Ireneusz Rogala, in charge of the presentation, highlighted the potential benefits which the undertaking would bring the municipality’s residents. Kolbudy will be Poland’s first borough to have a photovoltaic installation on water.

Both the head of the municipality and the councilmen expressed interest in this innovative undertaking. This will not only promote the municipality’s image as an open, development and innovation-driven community. As in other municipalities where Energa invests in energy undertakings, the community benefits, among others, from increased tax revenue and enjoys support given to various local projects which serve the residents.

The use of PV panels on water opens up new possibilities to increase the share of renewable energy in the energy mix.

Placing photovoltaic panels on water offers the advantage of increased energy production efficiency compared to onshore photovoltaic farms (by up to 10% approximately) and the company is taking this into consideration in deciding whether to go through with the undertaking. Further benefits include potentially slower evaporation rate and diminished growth of algae in bodies of water concerned.

Photovoltaic farms are being installed on water in a number of countries worldwide, including Japan, China, South Korea. Floating photovoltaic farms in those areas attain collectively as much as several hundred MW of installed power. The technology is being increasingly used in Europe as well – in the Netherlands, UK, France.

A pilot project for the innovative installation of photovoltaic panels on water was implemented by Energa OZE on a basin adjacent to the hydroelectric station Łapino. Studies were conducted on whether such placement of the panels will improve their performance and boost generated electricity levels.

With the pilot project successfully completed, Energa OZE is now planning to implement the technology in Poland. As studies of the technology have shown, installing photovoltaic panels on water significantly increases electricity production.